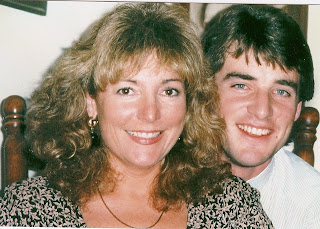 So, it occurs to me that I have lots of things that I want to say.....not that anyone wants to listen, but nevertheless, it seems that it could just fester if I don't get it out. I am a medical professional, who has been in this field for about 25 years (Wow, that sounds old. Probably because I AM old), and it just amazes me how clueless people can be. "You're short of breath? Oh, do you think that could be related to smoking for FIFTY YEARS?" But, I don't say it, and try to keep my face from saying it (which I usually fail at. Ask anyone. I have zero poker face ability). My work life consists of talking (and praying) all the way to work, that if I "kill anyone at all, let it be with kindness", and telling myself "You CAN DO IT". "You're a winner". "Hang in There", and multiple other poster slogans that just irritate me.

At home, I'm married to a fantastic looking man. No. Really. I can't even count the number of times, some insensitive boob asked me, "How'd YOU get him?" (or variations, thereof). Even my own mother, whenever I complain about him, says "But he's soooo cute!", like that makes up for every other failing. And, to make matters worse, he's REALLY nice. It's like being married to a puppy; everybody makes over him, and wants to pet him, and makes excuses for him when he piddles in the house.

But, I'd be lying if I said his looks don't matter......I mean, I DID fall for him, and fall in a big way. Okay, true story. This is how we met. He's a funeral director. A mortician. An undertaker. (You get the drift), and he would come to the hospital to pick up, ahem, "customers", and I had a MAD CRUSH on him. Seriously, I would see that death gurney coming around the corner, and my heart would be going a million miles an hour (actually, that might've been from the No-Doz). He was always very cordial, and professional, but NEVER, EVER flirted at all, even though, I all but gave him my house keys. Never knew that he liked me. Turns out, he's kinda shy. Who knew? I was able to capitalize on his low self-esteem, and gentle nature. SCORE!

There's lots of other details in this story, but since I assume I'm going to run out of things to say, at some point, maybe I should hold back a little. Plus, I have to go to the bathroom.
Posted by CherieJoLay at 6:36 PM