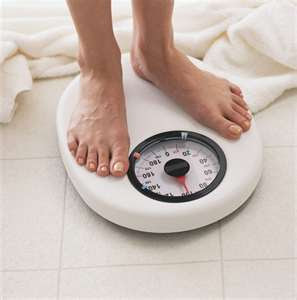 I have had a long, torturous relationship with THE SCALE. There's been a few (and by few, I mean, like, two) happy moments on THE SCALE, but mostly just mayhem and destruction. I can be feeling really slim.... really good.....smiling, even, but then.......THE SCALE reflects something horrifying, and it plunges me into despair.

Realizing my fixation with THE SCALE is not healthy, I even tried having my husband hide it from me, but then I proceeded to search my house, with all the fervor of a CSI team member, and then hid it from HIM, so he wouldn't know I found it.

What's even weirder is, the WAY I weigh. Our bathroom has a tile floor, and with slight adjustments, the scale will render slight variations in the number displayed. No lie, I have moved and weighed, no less than 15 times, trying to get the number that is least likely to make me hang myself. Additionally, I have found that when I step on the scale with my left foot FIRST, the number is lower. I know that seems crazy, but it's true. I'm not even going to get into all the techniques of weighing with one hand on the wall to "steady" myself, or standing on one leg, sucking in, or blowing out all my air, or any number of other strategies employed over the years.

Having said all of that, it makes it even more confounding what I did when I joined Weight Watchers with my mother. I had never done WW, and was not accustomed to the whole weighing in "semi-publicly" bit. One morning, I woke up really early, so had a bowl of cereal, did a few chores around the house, then went to pick up my mom to go to our Saturday morning meeting. On the trip in, I mentioned the fact that I had eaten something, to which my mom said, sweetly "WHAT??! ARE YOU CRAZY??!!! YOU DON'T EAT BEFORE YOU GET WEIGHED! YOU DON'T EVEN PUT LOTION ON!!! HAVE I TAUGHT YOU NOTHING?!" Wow. Wonder where I got my weight issues from?

Re: Weight Watchers. It was okaaaay. I just wasn't crazy about getting up early on my day off, and I resented the perkiness and condescending manner of the leader. I started just doing the weighing thing, then muttering something about an "emergency",can't stay for the meeting", but after the 5th time, they started to catch on. I couldn't take the guilt anymore, so I quit going.

One other thing about WW meetings. Okay, mine was in a strip mall, with WEIGHT WATCHERS on a huge, lit sign, AND there were no window coverings of any kind, so there we all were, perched (precariously, in some cases) on our folding chairs, for all the world to see! Plus, we had to walk in there! I'd rather someone think I was going to the liquor store (at 7:30 in the morning) and/or the cigarette store, than think I was going in to Weight Watchers! Why?! I'm weird! We've established that!

On that subject......one day, after the meeting, Mom and I were sitting in her car, deciding where to go eat (you know, since the weighing was over for another week!), and this guy pulls up next to us in an out of town construction vehicle. Our window was down, and he says "Excuse me, ladies. Do you know where the Wells Fargo Bank is in this town?" We told him, then he says "Thanks. Good luck at Weight Watchers!".

I was incensed! Fuming mad! How dare he think that we were there for Weight Watchers! Maybe we were going to the liquor store, or the dollar store, or the grocery outlet, but NO, he ASSUMED that we were going to Weight Watchers! Stupid, stupid, pig man! I mean, we could stand to lose a few pounds, but we weren't, like, bed-dwellers! THE NERVE! My mom interrupted my tirade, pointing, wordlessly, at my chest. There on my shirt, was my "Hi, My Name is Cherie", with "WEIGHT WATCHERS" in huge letters above it. Oh. Never mind.

I'm back to weighing in at home. Yes, it adds an extra 30 minutes to my morning routine, but it's worth it.
Posted by CherieJoLay at 9:07 AM