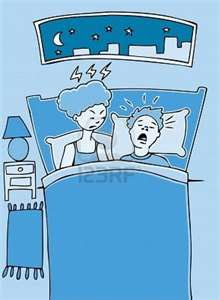 I don't believe that men and women are meant to share beds. Seriously, Ricky & Lucy had it right, although, I would take it a step further, and put those twin beds in separate rooms.

Ladies, if your husband doesn't snore, then count your blessings. I don't care if he's a cover-stealer, or a bed hog, there ain't nothin worse than a snorer. I'm not talking a little "light" snore.I'm talking a shake-your-bed, the-kids-can-hear-it-downstairs snore. In case you haven't guessed, I am married to such an individual. We'll call him "Scott".

On a couple of occasions, I was tempted to video tape him, so that all those females that think he's "so cute", could see what he looks like with his mouth all slack, and a line of spittle running down his chin.

And it's not just me that thinks he's over the top. I remember him going to a mens' camp with our church, and after that, the pastor told me that he had a "whole new respect" for me. Actually, from that point on, Scott was banned from their cabin. ACTUALLY, from that point on, they STOPPED having mens' camp altogether, but I'm sure that was just a coincidence.

Snoring isn't the only problem, though. "Scott" has no respect for pillows. I LOVE my pillows. They mean the world to me. I live by the motto "no pillow left behind". My husband (once) actually tossed some pillows ON THE FLOOR. You know what? I don't care if you can't get to the mattress for the pillows. The pillows have feelings, too! I have a system. Two pillows under the head, one pillow clutched to my abdomen, and one pillow ON my head (see "snoring" above).

The clutching pillow is something I learned after having abdominal surgery....it helps protect a fresh incision from, you know, splitting apart, etc. Now, it's just a security thing. I feel so protected. What do I have to protect myself from? I'm glad you asked....

Kicking, flailing, and other bed shenanigans. My husband works out, as in lifts weights. He has strong arms. Said arms do not feel good when they connect with my person. Nor do his giant feet. If he could rebut this (which he cannot, heehee), he would say that I AM the flailer, but methinks he's projecting.

Something else I don't get. How is it that he can get into bed, turn off the light, and FALL ASLEEP. Like, right away. That is soooo annoying! Especially, if we've been having a figh...., I mean "discussion", and he just drifts off to sleep without a care in the world, while I lay there seething, and plotting his death.

AND, of course, it goes without saying, that he NEVER heard our baby when he cried. Oh no, he slept straight through night terrors, projectile vomiting, and explosive diaper changes. He sleeps like a dead thing. I could be assaulted in the bed next to him, and he would never know it, until he woke up, and saw the chalk outline where my body WAS.

I'm assuming that on the few occasions when I WASN'T there, that he DID respond to our child, but that assumption is based solely on the fact that I never heard from CPS. It will probably come out in the counseling that our son will have in the future (some parents save for college, we're saving for counseling).

Lastly, what is the deal with making the bed? It is not hard. Really, it isn't. I make most of the bed before I ever get out (I will be happy to describe this technique, should anyone be interested), but that cannot be done unless there's no one else IN the bed. Since I have to get up at the unholy hour of 4am, Scott is always still in bed, therefore, it should fall to HIM, to make the bed, RIGHT? He does, sometimes, go on a "run" of bedmaking....sometimes lasting up to a week. I really love him during that week. I should say, I love him up until the moment he climbs back into bed and falls asleep, and starts........well, you know.
Posted by CherieJoLay at 9:24 AM