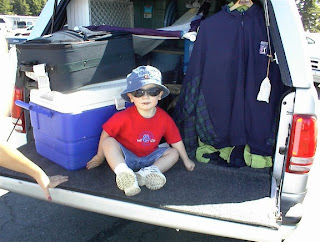 Awww, isn't he cute? Okay, so I just found this picture on my hard drive, and it took me right back to this trip. In September, 2001, we embarked on an ambitious road trip to visit family in Oregon and Washington. It seemed like a good idea, when we were planning it, but the reality of it was much different. I must digress for a moment, from the two year old, and say a word about the 37 year old male that traveled with us. We'll call him "Scott" (okay, okay, Scott is my husband and father to the 2 year old).

We'd planned this trip for weeks, nay, months, and are about to leave. We had it mapped out perfectly......just the right amount of time in the vehicle, interspersed with overnights in our timeshare condo, so suffice it to say, that we're on a SCHEDULE. Here's the scene: 2 year old (Sam) is strapped into his car seat, the portable VHS video player is wedged between the two front seats to provide entertainment to said 2 year old, wife (me) is wedged into her seat, and we're waiting. And, waiting. And, waiting. This might be a good time to mention that we wait for Scott A LOT (that's another story. It occurs to me that I have an endless supply of blogging material).

ANYHOO, finally I am forced to exit the vehicle and seek out my husband so we can BLOW THIS JOINT, and what is he doing? Frantically searching for his wallet. Again. He "thinks" he left it at work, so we drive to town, search his place of business, and do not find it. He keeps saying, "Let's just GO", but as I sweetly remind him, "YOU HAVE A CREDIT CARD IN THERE, AND WE NEED IT FOR OUR TRIP". Yes, I have the same credit card, but if we don't know where his wallet is, couldn't it be A) innocently sitting in a dark crevice or B)in the sweaty hands of a thief, filling gas tanks and buying electronics. If we can't find it, we need to cancel it!

I bet you know where this is going......we never found it, so had to call and cancel. Luckily, I still had a separate credit card, in my name, alone (WHAT? It was left over from pre-marriage. That's my story, and I'm sticking to it).

Back to the road trip. The toddler was hanging in there, at this point. We made it to Klamath Falls, Oregon, and spent the night, then left the next day for Bend, Oregon. That leg of the trip also went okaaaay, if you don't mind hearing the Tellytubbies say "Uh Oh", 8,000 times (the videos, remember? I know the Tellytubbies were weirdos, but if your kid likes 'em, you're watching 'em)

So, this is where the story gets serious, for just a moment. We were in Bend on Sept. 11, 2001. We woke up to the TV showing those horrific images in NYC, and I remember feeling like I just wanted to go home. It was so scary. Plus, we were heading to the Seattle area, which at that time, was being considered a "target". It's probably a blessing that we had to drive, because we didn't sit in front of a TV all day, seeing all that chaos and mayhem. We DID listen on the radio, but that wasn't as traumatic. Okay, serious part over.

What happened after 9/11? Remember? The country pulled together, and in a show of our united patriotism, everyone was displaying the flag. EVERYONE. EVERYWHERE. Why does this matter? Because Sam was captivated by the flags. He kept saying "Whassat? Whassat?", and you HAD to answer or he wouldn't stop. Wee little problem, though. He couldn't say "FLAG", it came out, "F**k". Yep, THAT four letter word, and amazingly, not only was his pronunciation dead on, he apparently enjoyed saying the word. So, say it, he did. OVER AND OVER. Oh, hello, nice elderly lady, sporting your flag sweater. Yes, this is our sweet child. Say "hi", sweet child. I don't have to spell it out, do I? He didn't say "hi". He pointed to her sweater, and said (you know).

Aside from his potty mouth, I have to say, he did pretty well, for quite awhile, on this marathon road trip, but then he started to lose his little toddler mind. At one point, he just started yelling. Not crying. Just yelling. So, I also yelled. That is when Scott looked over at me, like, "really?", but I kept on. Sam actually stopped, and he also looked at me, like, "really?", but, hey, it worked.

Then, there was the stretch of endless highway, where, out of sheer boredom, Sam began removing his clothing. No small feat, when you're strapped within in an inch of your life, in a car seat! He didn't JUST remove, though. As articles of clothing came off, he hurled them into the front seat, which I took to be an expression of displeasure (I'm quick like that). Luckily, his little chubby fingers couldn't get his Huggies undone, or this story could've taken a really ugly turn.

Kids are smart, too. They figure out pretty quickly, when the normal discipline regime has been abandoned by the parental units. You know how it is.....you're around other people, and you don't feel it's appropriate to scream, yank, or threaten their lives in front of witnes....I mean, strangers. So, Sam took full advantage, and became a mad man in the condo, in restaurants, at Great Grandpa's dinner table. At 2, he had perfected the ability to not look at me, therefore missing the steady GLARE directed at him. The one that says "I can't get at you right now, but believe me you, buddy, you're in for a world of hurt, when we get home."

When I look back, I am amazed that we even DID that trip. I don't recognize those people, who thought it would be "fun" to drive a toddler over three states. But, we made it home, in one piece. Sam is still with us, and other than the fact that he couldn't say "flag" correctly for THREE SOLID MONTHS, we completely recovered from our ordeal. Oh, by the way? To the Veterans who put on a pancake breakfast, with a large FLAG, prominently displayed? Sorry about that.

P.S. I just realized that I didn't finish the storyline of the lost wallet! Guess what? All along, it was in the toe of one of Scott's GIANT shoes. He had stuck it in there, as he carried stuff in the house, from his truck. Isn't that too funny? (not) He found it a couple days AFTER we got home, and to his credit, admitted it to me. I don't know why we're still married. I really don't.
Posted by CherieJoLay at 8:06 AM