A Typical Evening with the Laytons 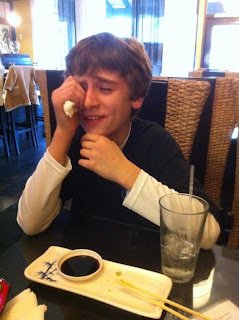 So, I come home from work (early shift today), and ask Scott & Sam, to go "on a walk" with me. They both agree. It goes pretty well, except for the nonstop trail deviations, onto the muddy shoulder (Sam, not Scott). Plus, when you're going uphill, and a kid is literally running circles around you, no breathlessness at all, it's kinda annoying.

So, we get done, and naturally(?) think "we want sushi", and head for our local sushi place. We order, and the waiter says "Wow....that's a lot of food". Okaaay. We're about to spend a fair amount of cash in here, and you just basically called us pigs.

The first platter comes, and it's the stupid sashimi that my husband insists on getting everytime (not a big fan). So, we all stare at the beautiful display (most of which will NOT be eaten), and await the arrival of our other food. Meanwhile, we begin to prepare our lil dishes of soy sauce w/wasabi. We remind Sam "you want to mix those well", but you know, we're ADULTS, and he's 12, so he's WAY smarter than us, so he just sticks a glob of wasabi......naked, un-soy-sauced, roll-less wasabi IN HIS MOUTH. Well, we missed the initial entry, but it soon became apparent that he was either having some sort of seizure, or his abdominal aorta just ruptured, because he starts writhing around in his seat, head down, sucking down Sprite like there's no tomorrow.

Because we're quick like that, we deduce from the scene, what has occured, but he's not talking. I'm not exactly sure WHAT he was doing, but it involved aforementioned writhing AND, possibly, weeping. So, like any good parent, I grab my iPhone & start taking pictures.(see "choking on a cupcake" on youtube for another example of my parenting skills).

At this point, unbeknownst to him, since his back was to the door, an ambulance has pulled in, and parked outside the sushi place. At some point of this little episode, I believe his head spun (think Linda Blair), and he glimpses the medic unit. "Wha?, he sputters, "why are THEY here". "I called them", I said. "I know you THINK I was taking pictures, but REALLY, I was summoning assistance for my ailing child." At this, he just rolls his eyes.

Sam finally settles down, and we move on to consume the ENTIRE, literal boat-load of sushi (we'll show that waiter guy!). He comes over and says "Now what, guys". I said "I just want to go to bed". The waiter chuckles, but Sam looks mortified and says "Can I have the car keys, please. I'll wait outside". Since I'm sure he would enjoy it, I went with him, and leave "dad" to pay the bill.

I get in the passenger side, and he's (trying) to get in the rear passenger door, and this huge black Mercedes just comes wheeling in, and poor Sam has to retreat, because this guy wasn't stopping. Turns out, it's an old guy (REALLY old), and his wife, and possibly his great-great-great grandchildren? (They were young). He throws open his door and it slams right into the side of our car. He walks to the front of our vehicle, seemingly unaware that I'm SITTING RIGHT THERE, and proceeds to closely exam the FRONT of our car. I guess when he saw my dangling fog light, and residual Bambi damage, he assumed "Welp, THESE people aren't going to be concerned by a door ding", and proceeds into restaurant.

You're probably wondering "Cherie, did you say anything?" No, I did not. Why? I was so freaking full of sushi, that just putting on the seatbelt almost caused an upchuck, so there was NO WAY that I could muster up the fortitude to enter into a confrontation, with an old, yet sprightly appearing, dude. So, when SCOTT gets to the car, we tell him what happened, and he goes to inspect, and says "Eh". Not sure exactly what THAT meant, but assumed no damage.

On the way home, (having seen a classmate with his "other" parents at the restaurant), we discussed how kids of divorced parents usually alternate spending time with each parent, and commented on the fact that Sam has never had to do that. "Your parents are still married", I said, and so "unfortunately we don't have that 'built-in break', when the kid goes off to the other parents". In retrospect, I could've chosen my words more carefully, but I figured he's not listening anyway.

He says "Really, Mom? Did you say unfortunately? Wow." (so, okay he WAS listening).

It's not my fault; I come from a long line of suboptimal parenting......I mean.....not BAD parenting......just the parenting style, wherein the children are there for your entertainment (and to empty the dishwasher). I cannot even BEGIN to tell you the things my dad did to torture us over the years (actually, I can....and I will, in another blog). And before anyone gets their knickers in a twist, Sam KNOWS that we are just teasing, and he gives as good as he gets, so I don't want to be seeing CPS on my caller ID. Just sayin...
Posted by CherieJoLay at 6:03 PM