Do NOT Touch my Bacon 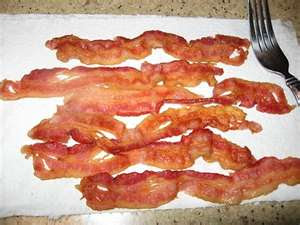 I cooked some bacon this evening, and after I realized that my HUSBAND had taken some of it, it reminded me of an incident from my childhood. My dad was a colonel in the Air Force, and that involved a lot of social commitments, as well as the "whole risking your life" stuff. As we got older, my sister and I were home quite a bit, by ourselves. I'm thinking I was like 12? 13? years old, and my sister was three years younger, when THE INCIDENT occured.

On that occasion, I had also cooked bacon, and as she casually walked through the kitchen, she took a piece. SHE.TOOK.A.PIECE. I was filled with a murderous rage, I didn't even know existed within me. Immediately, realizing her "crime", she took off running, with me in hot pursuit. My mom had all these fancy schmancy, knick-knacky things all over the place, and some BIG brass candlesticks. Like five feet tall. They had big candles on them, and there was a tray, halfway down, where she had bunches of fake grapes displayed.

I hit my sister, with a flying tackle, that sent us both into one of those candlesticks, which drove it into the wall......leaving about a half inch "divet" in the sheetrock. Well, then, I went into damage control mode, wherein I alternately begged her not to "tell" or threatened further bodily harm, if she did. (This technique NEVER worked with my sister. Some people are born tattlers, and she be one. No matter what she promised, she cracked under the slightest pressure.) So, I finally got her to agree not to tell, then went to work on the wall. Somewhere, I had seen, or heard someone talk about using toothpaste, as a sort of caulking substitute, but we only had the gel kind. It wasn't like colored gel, but the consistency wasn't as paste-y, as I would've liked. So, I carefully filled the hole, re-positioned the candle, and put those dang grapes back in their tray.

My heart was pounding, when I heard my parent's car pull in the driveway, but I felt pretty confident that I had covered my tracks. My mom walked in, no lie, and said "what happened?". At that, my sister dissolved into tears, and spilled the beans about the whole story. I don't even remember what punishment I got.....probably grounded (that happened on a regular basis.......the grounding business, I mean. It might surprise you to know that I haven't always made the best decisions).

Other sibling stories, will necessitate an entire blog entry, but for now, it's all about the bacon. Several years ago, waiting for my mom to get out surgery, my dad, Scott (the aformentioned HUSBAND), and I were having breakfast in the hospital cafeteria. I was facing the part of the cafe where the cashier/server was working, and I'm ashamed to say she witnessed this event. Scott, sitting across from me, reached over and took a piece of bacon off my plate. The "witness" says that I got a look on my face, like "NO YOU DI'INT", (but times 100), and she started cracking up. She was the only one laughing, though, because I actually think that was the first time, my husband saw the "bacon face", and he drew back in fear.

This is what made it all the more puzzling that he would, tonight, think that it was a good idea to touch my bacon. AND, he tried to be sneaky about it, too, ......he just broke off the ends of a couple of pieces, and then plastered on his face, what he thought was "innocence". It didn't work. I KNOW my bacon, and I knew it had been altered.

I have some deal breaker issues for my relationships, and I'll just give you the top three:
1. Don't lie to me.
2. Don't cheat on me.
3. Don't touch my bacon.

Not necessarily in that order.
Posted by CherieJoLay at 6:51 PM