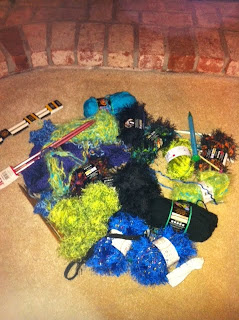 I'm missing something, in my genetic make-up. When the Lord was handing out crafting ability, maybe he used an "every other" type system. This is nothing new. I've spent my life, trying to do new things, going totally overboard, getting frustrated, then giving up (there's a lot of crying in there, too).

My parents used to give me a hard time, because I was always starting things, but "never finishing". (Thanks mom & dad, for the encouragement ;) Here's just a partial list, of things I've tried:

**Hooking my own rugs (sorry, I don't know any other way to say that). I gave up the hooking, because it made my fingers sore.

**Making candles. That's a distant memory, but pretty sure it involved burns of varying degrees.

**Coloring those posters, with all the number sections (you know, use this color in all the fives, this one in all the sixes). Never finished. Same with coloring books. Rarely finished an entire picture.

**Seal-a-meal. Cook for the next six months, seal it in the thingy, and stock your freezer. Could never get all the air out, so no good seal.

**Sewing: Took a class in high school. Too many disasters to recount, but one highlight was making a shirt for my dad, adding a special touch of embroidering to the pocket, which rendered it completely useless, since I sewed it shut. I ended up paying other students to do my projects. My sewing teacher, a "glass half-full kinda gal, signed my yearbook "To a persistent seamstress".

There's a couple of things I didn't quit. I wanted to play piano, so I taught myself to read music (not like, expertly, or anything), but if I wanted to play a particular song, I would make it happen. And, if you didn't know better, you might think I sounded halfway decent. That reminds me, though, I couldn't have a piano, as a kid, because my dad was military, and we moved a lot, and "we aren't gonna drag a damn piano" everywhere we go, so I used an old plastic Magnus chord organ to learn. Then, when I was 18, and had my first job, that's the first thing I bought: an old upright piano for $500.00. I still lived at home, and it was in my room. I had tons of music; lots of those books, with multiple songs. I would start playing, get bored with a song, and flip the page. My family says, they would hear a song start, be getting in the groove a little, and then SWISH,SWISH (pages flipping) on to another song.

I wanted to learn cardiac ultrasound, and I did it. Was a single mom, worked 12 hour shifts in Intensive Care, went to school at night, and did the externship on my days "off". Passed the boards, (that included PHYSICS, btw) so clearly, I CAN do some things.

Was always interested in cooking and baking. Talk about frustrating!! So many botched recipes, so many attempts at the SAME thing, until I could get it right, but I didn't quit. No lie, tried making fried chicken, no less than a dozen times, til I saw someone else doing it, and I noticed she didn't take the skin off. OH! OKAY! Thanks, MOM! My mom didn't like the skin (what up with that?), so she had always taken it off, when she cooked chicken, so I thought that's what EVERYBODY did. That's why the stinking breading never stuck! I also recall making spaghetti sauce, that simmered all day, but I had put the meatballs in, at the beginning, and by the end,they had soaked up all the sauce. Just a pot of big balls...no sauce.

So, what is this defect in my character, and why does it only rear it's ugly head seemingly, with artsy-craftsy things? Let's talk about the knitting.......I think my Knitting Mentor knew she was in trouble, when I looked at her blankly, in response to her inquiry "you CAN tie a slip knot, can't you?". She helped me get started. I had the dreaded first row ON. Then, well, we don't live in the same house, so she can't oversee every knitting attempt. She suggested looking "online" for helpful videos, but they are all so perky and annoying, PLUS I couldn't do slo-mo, and I just couldn't get it!

Tonight. Tonight was going to be the night. No one home, but me. A fire going...music...a little drizzly outside. Cozy, right? I got out the knitting. Tried the knotty/knobby yarn, that looked so dang pretty in the store. I can't get past the little knobs. It just made a mess. So....I moved on to another ball of less knobby yarn. Could not find the end of the yarn.COULD.NOT.FIND.THE.END. Pulled whole thing apart, finally finding the end, but guess what? It has knobs, too. They're smaller, yes, but I was still getting hung up. In sheer desperation, I returned to the original thing that my Knitting Mentor started me with. I KNEW that was right. I was going okay for a little while, but then noticed a loopy thing, that shouldn't be where it was, and then realized that, somehow, while pulling out some of the botched stitches, I ended up with the yarn coming out of the MIDDLE of the row. This is when the weeping started. (I'm sorry, Jen. I know you said there's "no crying in knitting"). As I said on FB, "It's yarn armageddon over here". A lot of carnage (or should I say "yarnage")

Had someone come to my front door, right then, they would've thought I just received news of someone's demise. I was a wreck. (Oh, who am I kidding.....I would not have answered the door....just done the GI crawl to get through the kitchen, and hide in the bedroom, as usual). Also, mixed in, with the wailing and gnashing of teeth, there may have been some "language" (just keepin it real).

I think it also needs to be said, that we have been duped by the media's depiction of "knitters/crocheters". They always look so serene. BUT, if necessary, they can carry on a conversation, discipline their children, or just gaze adoringly at their spouse, whilst creating some elaborate item, or just darning socks (I'm imagining Caroline Ingalls. If they had chewing gum, she could probably do that, too, simultaneously. Oh, wait....she probably MADE her own gum. GAH!)

Welp, that's it for me. I'm not starting any more projects, or learning any new things. I'm just going to go work, come home, go to bed, and repeat until I die. Just kidding........kinda.
Posted by CherieJoLay at 6:19 PM