My Son, My Hero 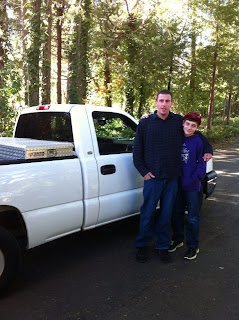 My oldest son is Alex.

As I started typing this, he was in Sacramento, working to resolve a situation, that has lingered from his past....something he has mishandled, and trying to make it right. He is in recovery. A little over 13 months, clean and sober.

I don't know what the outcome will be, but I know this. Alex trusts God.

Yesterday, he came to me and described his situation, and I immediately said, "They can't do that! It's not fair!", and Alex said, "No, Mom. It was MY responsibility, and I should have handled it, to begin with".

This is amazing to me. He surprises me, almost every day, with his newfound insight, willingness to listen, and efforts to change.

Getting clean is hard. Getting REAL, is almost harder. It's like every day, a new situation presents itself to him, and he goes back to the basics. What does God say about this? What have I learned in recovery? What is MY role in this?

Most "normal" people don't do this, let alone, a recovering addict, who lived EIGHT years, in a world of self-centeredness, day to day survival, and absent from his loved ones. And, he WAS absent. He was there, at times, physically, but ALEX......the REAL Alex, was buried under his addiction, pain, and shame.

Alex has always been, how can I say this.......boisterous?.....kinda loud?....and, yes, even exhausting. He would do almost ANYTHING for a laugh.

**He was late for a high school class once, and so, somersaulted into the room.

**He rode his bike down our road, in just his boxers.

**He got off the school bus, and "mooned" the remaining students (and the bus driver, who was NOT amused), but when he got in trouble for it, he said "I don't know what the big deal was......it was only a 'half moon'".

**They made a video of campus security, following him around all day (at high school), set to the tune of "Bad Boys".

Anything to get a laugh (I don't know where he gets that;)

The other thing Alex could do is, get people, or should I say "manipulate" people into doing what he wanted, and they WOULD! I was always shocked at what he could get people to do for him.

THAT quality I knew would serve him well, if he directed it in a positive way.

We suspected that Alex had a substance abuse issue, (after high school, and not living at home), and I had told him, "when you're ready, we're here". So, in October of 2006, he finally came to us, said he had a problem, and wanted help. "At last", I thought, "now we'll be able to fix this".

I'm giving you the condensed version, but suffice it to say, that was only the beginning of a long journey......a long, heartbreaking journey, where just when we'd think he HAD to have hit his "bottom", he still had lower to go. It was painful to watch. It was painful to set those "tough love" boundaries, and STICK to them, and not everyone could.

Alex has always been a sensitive guy. Even as a child, he was compassionate, and really attuned to people, and their emotions. He's SMART. He's always had the ability to explain how he felt with "word pictures", and you would really GET what he meant.

We always openly talked about addiction (with my personal experience, but while that's part of the story, that's not the story I'm telling now), and he was fully aware that he had the propensity for it. That he had the "gene", or whatever it is, that makes some people "normies", and some people not. He swore up and down, he would NEVER do drugs, he would NEVER smoke, but as we all know, the best intentions........well, they just go flying out the window, when Addiction comes in, through the door.

Alex is a leader. Alex is a sponsor, (for men that REALLY want to get clean), and will do anything to help somebody get & stay clean, or, as he does, as a leader in The Landing, try to share his story, and his experiences with younger teens (including his 13 year old brother, Sam), who might just be on the cusp of turning towards drugs, for the "lie of relief".

Today, Alex is just what I always imagined him to be......"A Man of God". A strong leader, and someone that people just love to be around, because he now has a joy "force field". You can almost, visibly SEE it!

He takes one day at a time, deals with one issue at a time, but doesn't "give in" (like he would have, in the past). He looks upward. He has the faith of a small child. He KNOWS that God will find a way, and he need not be anxious for anything.

He does what he's been taught to do. Every day.

He listens to others. Every day.

He makes amends. Every day.

He is putting all his trust in God. Every day.

This "recovery thing".......it's tenuous. But when you stay the course, and do what you KNOW you're supposed to do, EACH DAY, then you WILL be okay.

Alex is more than okay (today). He's awesome. He's the man that I KNEW was in there, and to see what he's doing, with his life, right now? Exciting

To see what his future will hold? Don't know, but suspect that it is beyond his wildest dreams, and that God will use him, in a mighty way.