I've Been Thinking About: My Self-Image 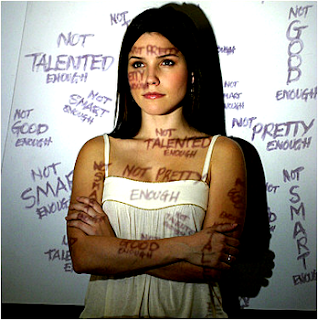 "You're too sensitive", I was recently told (again). Yes. I know this. I have total recall of every critical thing that has ever been said to me. I know what time of day it was, what I was wearing, and which direction the wind was blowing. Now, mind you, I have had plenty of positive feedback during my life, but my (borderline pathological) mind takes the criticism, mulls it over, flips it all around, analyzes it, then logs it as "accurate". Am I aware this is not what I'm supposed to do? Um, yes. And yet, this IS what I do.

Here's a sampling of some of the soundbites rolling around in my brain:

"Oh. That looks better on you than I thought, cuz you tend to be a little 'hippy'"

"You kind of have a trout nose"

"Are you pregnant, or have you just put on a lot of weight?"

"Your voice can be a little nasally, at times"

"You're too sensitive" (it bears repeating)

"You don't let go of things"

Those were just a few of the things that have been said to me by others. The things that I say to myself, are far worse. I have always struggled with body image. When I heard about a guy who had rigged up a way to "spy" on women in dressing rooms, I gasped, when I realized that I had actually been in THAT dressing room. However, I soon was convinced that I had actually provided him the equivalent of a "commercial break" (to go potty or grab a snack), because there is NO WAY he would want to observe me wriggling in and out of clothing.

I even apologized to my infant son, strapped into his little seat, waiting patiently for me to get out of the shower."Sorry", I said, "Don't worry.......not ALL women look like this". I have never felt okay about my body. I saw some video, shot in the late 80's, early 90's, and it took me a few minutes to realize the denim-clad rear end I was looking at, was ME. I wasn't fat! I looked pretty dang good, if I do say so myself! And yet.......I never thought I did. I even cut off the bottom of a picture of me, in a bathing suit & shorts, proudly holding up the first fish I ever caught (taken when I was in my late 20's), because my "legs looked gross".

I've always had designated areas that I considered "okay", but as I've aged, those areas have decreased. Also, I've had multiple abdominal surgeries (beginning at age 20), and about 18 months ago, had open heart surgery, so I have quite a few scars. My husband (a mortician), helpfully pointed out that if I had two scars from both shoulders towards the center chest scar, it would be "like an autopsy".

Back to the sensitive thing........there's the issue of getting my feelings hurt pretty easily, but there's also the "cry at the drop of a hat" thing. As a kid, my Dad would just throw a box of Kleenex in my direction, whenever he heard the theme music to "Little House on the Prairie". For some reason, the males I'm related to, find it hilarious that I am brought to tears so easily. If we are watching TV together, and it starts getting all touchy-feely, my kid starts sneeking peeks at me to see if I'm bawling yet. I am trying so hard NOT to cry, that I actually feel like my throat is closing up, and then eventually, it bursts out of me: a big intake of air, like I just surfaced from the bottom of the ocean, and then I'm off the cliff, sobbing, trying to explain WHY I'm sobbing, but they can't understand a word I'm saying.

I get emotional watching sporting events, anything that includes an American Flag, and even at work, when I see a family member being loving with their sick relative. Beautiful music makes me cry. Beautiful images make me cry. If somebody else tears up, then I tear up. I cry at church, pretty much on a regular basis, and know to NEVER be there without tissue.

I cried at the store once, because there was a "sad-looking" man, cried driving down the road, because I saw an extremely overweight boy sitting at a bus stop, and I was worried that he "didn't have any friends". I cried the Christmas after Princess Di died, because I was thinking of her "poor boys" (as an aside, this last thing happened in the middle of my husband and I wrapping presents. I started crying, and he looked up, startled, then I was able to say "Sad.Princess Di. The boys", and he completely understood). And once, shortly after my husband and I got married, we had my family over for dinner, and all of a sudden, I was just overcome with emotion, and ran out to the patio. My husband followed, wrapped me in his arms and said "You're happy, right?", and I was. Realizing that I FINALLY had the right man, the right relationship, and was experiencing true love. That bubble was burst pretty readily, because upon re-entering the house, my parents(who had also figured out why I was crying) were completely mocking me. My Mom was in my Dad's lap, fake crying and repeating "I'm so happy, I'm so happy". (Now, it should be clear to everyone why I'm the way I am).


I know that most people think I'm kind of cynical, sarcastic, and smart-alecky, but there's other parts to me. Good parts. I also realize that sometimes I use snarkiness and/or anger because that's easier than feeling the discomfort of being "unacceptable", or "not good enough". I know that to do that, to feel that, is against everything I've been taught about being created in "God's image". Who I am to assess His creation as being "not up to par". Wow. That's pretty arrogant when you put it like that. So, intellectually, I KNOW what the answer is. I KNOW that this vessel my soul occupies, is temporary. I KNOW that I am loved and accepted. But my humanness is constantly butting in, with those negative messages, and it's a daily battle within, that requires pretty consistent work (and prayer) to keep it from being my "reality".

I believe there's a reason for everything I am, and everything I've gone through. There's a reason for the things that have happened to my family and friends. There's a reason for EVERYTHING. I just don't always know what it is. In fact, MANY times I don't know, but it's okay, because thank God, it's not up to me. There's Somebody who oversees it all, and keeps me afloat, like loving water wings. So, if I start feeling "less than" or "not good enough", etc, etc, I know that message is not the RIGHT message. It's a lie, that I do not have to accept.

"Too sensitive?" Probably. But I don't necessarily think that's all bad.