Going to the "down there" doctor 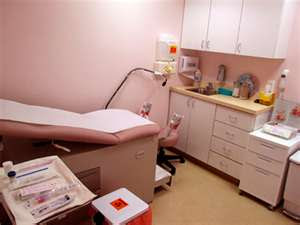 Back home, after a visit to the doctor. Let me first state that, unlike many other areas of my medical care, I DO adhere to the annual visits to my OB/GYN. Well, this last time, there was a "slight abnormality", which necessitated a repeat exam. It's like, once a year is not enough fun for me, so what the heck, let's do it TWICE a year!

I've posted before about being in the exam room, hurriedly getting undressed and/or re-dressed, as if the building was on fire, never taking my eyes off the door handle, lest someone unexpectedly enters. I don't think I could move any faster if there was a gun to my head.

Let's talk about the waiting, though. The WAITING, in the exam room, wearing the paper towel gown and "lap mat". I spend the entire time, trying to strike just the right pose for when the Dr enters the room. It's not as easy as it sounds......I actually laughed out loud today, because I realized I looked less like "Totally-at-ease-with-this-and-couldn't-be-more-comfortable", and more like "COME HITHER". It really doesn't matter what look I'm going for, anyway, because I always end up clutching the Bounty-made gown so tightly, in my sweaty hands, that the gown essentially dissolves. I've also tried the super casual, swinging my feet, while we talk (pre-actual exam), but there's really not that much room to swing, so it looks like I'm seizing.

Then, when you lie down on the table, and the actual EXAM part starts, I always assume this "Oh my, ah've got the vaaapors" pose, (my arm thrown up, back of hand against the forehead) At least this time, I didn't blurt out "MY FRIEND KRISTEN RANKIN SAID TO SAY HELLO" right as the cold metal thing made contact. (She DID, in fact, ask me to say hello......there was just probably a more appropriate time to mention it)

Then there's the upper parts exam. Everything in my being is screaming "YOU'RE NOT MY HUSBAND", but I just lay there, compliantly, answering yes to every question: "Do you do self-exams?" "Do you KNOW your breasts" "Do you wish you were anywhere but here?" (Ok, I made up the last one)

This time was kind of unique, in that they were very busy, so the medical assistant took me to the room, said she'd be right back, and meanwhile "go ahead and just weigh yourself". HA! SCORE! I get to say whatever I want!!! But then, I considered the possibility that this was a trick, a ruse, a trap. That they would have me do it, then THEY would do it, and expose me for the liar that I am, and then I would be humiliated for all eter...........it's possible that I'm overdramatizing.....I do that sometimes.

In closing, let me just state for the record, I really like my "down there" doctor. He's the nicest guy EVER, and he delivered both of my sons (14 years apart!), and has been a big help to me over the years. It's not him, it's ME. I just have this weird thing about being upright and clothed when I talk to doctors. It just makes for a more even playing field. Which just gave me an idea! Would it be more comfortable if HE also was wearing a paper towel gown? Huh?!

Posted by CherieJoLay at 5:20 PM